A proud species who need a little help 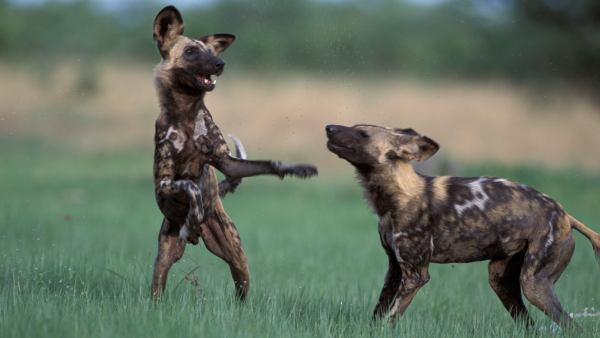 Painted Dogs are almost as rare as the icon of endangered species; the Giant Panda. Habitat loss, predator control killing and disease have all been significant in the rapid decimation of their numbers.

Painted Dogs are an admiral and proud species and their population has suffered predominantly due to their increasing interaction with human populations.

How can your donation help? 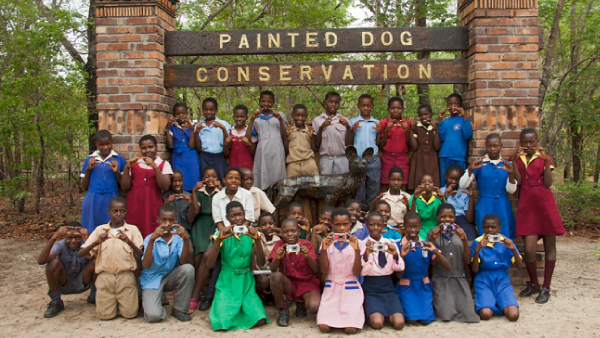 Deep beneath the ground, in a teak woodland near Hwange National Park, lies a den with 10 small painted dog puppies. This is the true story of one of those puppies, a heroic little fellow named Eyespot of the Abakwenyana Pack. 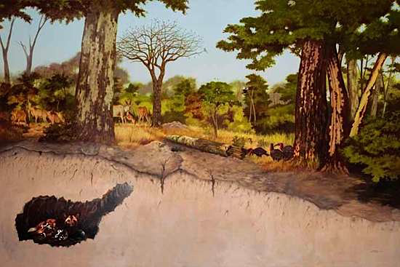 Eyespot is almost indistinguishable from his litter-mates, except for two white eye-spots on his hind flanks. In June, his mother Necklace, the pack’s alpha female, chose this abandoned aardvark hole and expanded it to create a den for her litter.

Though only 2 weeks old, the puppies have begun the weaning process. Even now, Eyespot is as eager for meat as he is for milk. The rest of the pack has left for their afternoon hunt, leaving Necklace with the pups for the last time. Tomorrow, faster than she would have liked, Necklace must leave the pups and join her mate Bobtail, the pack’s alpha male, on the hunt. Due to recent deaths in the pack, her skill and leadership will be needed to hunt effectively enough to feed the rapidly growing pups. 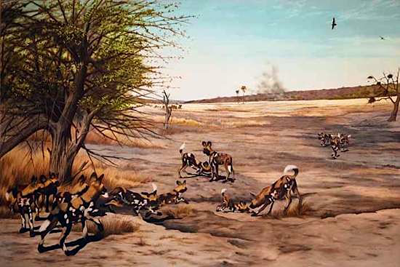 October is the hottest and driest time of year in Hwange. Eyespot is now four months old. He left the den with the pack for the final time four weeks ago, beginning the pack’s “nomadic phase”. As usual, Eyespot and his siblings followed the pack until the hunt began in late afternoon. They were then grouped on the edge of the vlei, safely guarded by their babysitter.

The hunters have killed a duiker and are returning to regurgitate meat for the puppies and their babysitter. Eyespot’s brother Arrow is the boldest of the puppies and the first to bolt from the group. He is named after the white arrowhead on his shoulder. To communicate, painted dogs use many different calls and behaviours. Arrow lowers his head and wags his tail, making a special food-begging call to tell his uncle he is hungry. All the dogs in the pack feed and care for the puppies of the alpha pair. 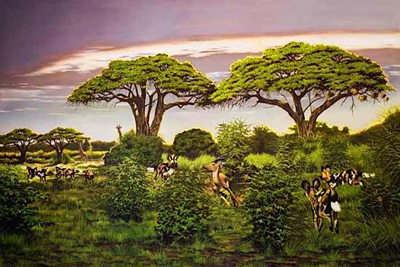 An evening hunt through the acacia scrub lands is in progress. One and a half years have now passed since Eyespot and his siblings were born, but they are still not very good hunters. Eyespot joins the chase in order to learn the complex skill of hunting. As part of the pack’s hunting strategy, two of Eyespot’s aunts head off the impala from another direction.

It is January and Hwange has been transformed into a lush green world once again by the coming of the rains. During this time of year, the pack ranges widely on hunts, sleeping in a different spot each day. This nomadic life exposes them to new dangers however. Recently, two of Eyespot’s sisters were killed by motorists when the pack crossed the Victoria Falls Road. 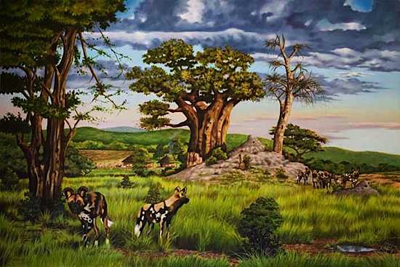 It is February, the middle of the rainy season. A year has passed. Only three of Eyespot’s siblings survive. His two remaining sisters left the pack last year and joined a solitary male from a neighbouring pack. By now, Eyespot has helped raise two litters of pups and has become an expert hunter. He and his brother Arrow are ready to start a pack of their own.

On this fateful day, while the pack is moving through the rural lands bordering the park, the two brothers decide to leave the Abakwenyana Pack, never to be part of it again. The dispersal of children from packs is an important part of painted dog behaviour. 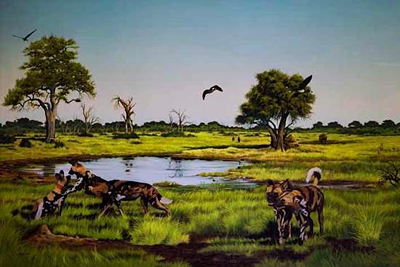 A month later, Eyespot and Arrow have been living a meagre existence on their own. Hunting dogs need a pack. Their life depends on the presence of helpers and hunters. Now, toward the end of the rainy summer season in March, they meet another small pack, the Khanzingas, by Livingi Pan. It is headed by a female called Crescent and she has only her two remaining children. The pack was once eight animals strong but most, including Crescent’s mate, have recently been killed in snares set by poachers. Crescent accepts Eyespot and Arrow. This is how new painted dog packs are created. Arrow, who excels at hunting, becomes the new alpha male of the pack.

Last week, researchers darted Eyespot and fitted him with a radio collar. This was a stressful event for Eyespot, but the act may just help save the pack. It means scientists can keep track of their movements and try to save them from poachers. Perhaps the Khanzingas are on the road to recovery. 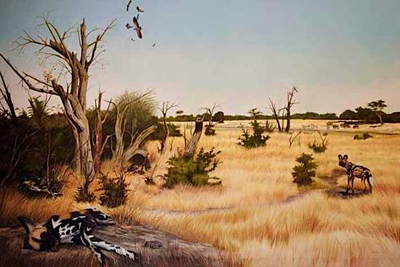 Tragedy has struck the new pack. While Crescent lay in the den with 13 new puppies, the hunters ran into a line of snares set by a poacher. Arrow was the first to be caught. When the other adults came to help him, they were snared also. The entire pack of hunters was strangled to death by the tightening wires, all except Eyespot.

Struggling to break free from the suffocating wire, Eyespot was able to escape thanks to his radio collar. Strengthened with thick leather and a steel band, the collar is specially designed by Painted Dog Conservation to protect the neck in case the wearer is snared. The collar saved Eyespot’s life, as he was able to pull the snare loose without being strangled. But what will become of Crescent and Arrow’s puppies, now that they have lost so many hunters, including their father, the alpha male? 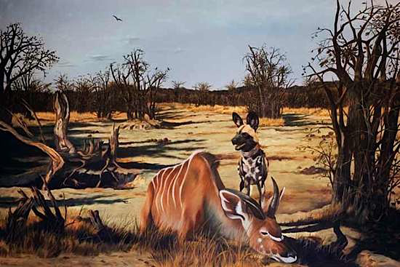 Eyespot must now hunt alone to feed Crescent and the puppies. Crescent left the puppies early to help him hunt, but was then snared around her leg. Painted Dog Conservation (PDC) researchers removed the snare, but, for now, she has been left too injured to hunt. Since painted dog hunting strategy depends on a group of dogs working together, the chances are slim that one lone dog will be able to catch enough prey to feed the whole pack. Few of Arrow’s puppies are likely to survive, but, if Eyespot can make it, he will take his brother’s place as the new alpha male in what remains of the pack.

Eyespot is proving to be an extraordinary hunter however! This morning, hunting in the mopane scrub, he has managed to kill a kudu by himself for the third time in August. This heroic feat will give the pack enough to eat for one more day. Unfortunately, because of such unnatural threats as wire snare poaching, painted dogs have become an endangered species on the edge of extinction. 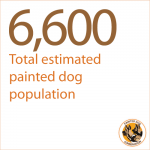 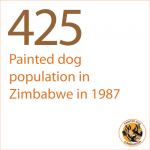 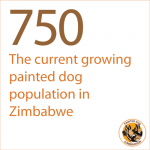 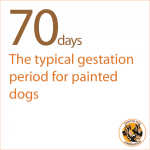 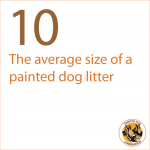 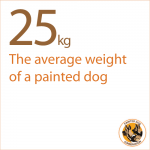 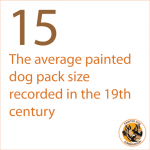 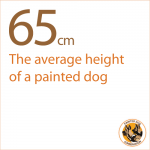 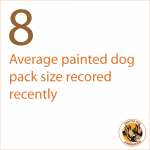 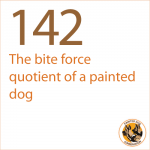 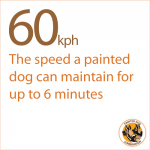 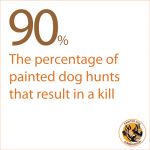 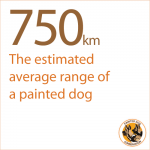 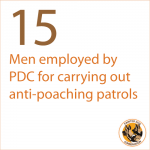 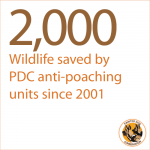 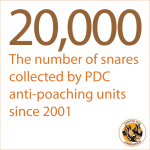